The first week of summer

The summer solstice was just a few days ago and today, after 14 months since the knock down, Ventura sailed once again! 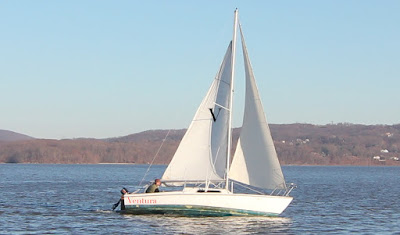 It was a very nice day though I could have used just a touch less wind, but in the end it was just fine.  Trying to get this rig back together and sort out everything is tedious and time consuming.  One really needs to be happy just "messing about" in boats with a trailer sailor because so much time is spent getting the boat to the water and ready to go, then doing the reverse at the end of the day.
Our sail was only about 2 hours, but it was enough time to take the boat thru it's paces.  We raised both main and jib.  We reefed the main.  We tacked.  We jibed.  We docked and we used the motor.  It is all working again.  The only thing we didn't really do was anchor.
I have along "to do list" after the sail.  Mostly things I forgot, some important, some not so much.  I forgot to put on the rigging for the reef point, that was very annoying.  I made it work with spare line onboard, but heavily chastised myself for not thinking it all thru.
The out board was a bit inconsistent as we left the dock and eventually died, but we had decent wind so we just sailed.  On the return I ran it for a while and it eventually evened out and ran the entire time we needed it.  This was the first time it has really run since it was IN the river.  I did maintenance it after it's sinking but hadn't really run it very long since.  I think it will be fine.
In truth my enthusiasm for this kind of boat, this kind of sailing isn't very strong.  I miss my full keeled cruiser on it's mooring.  But I will make due with what I have right now.
It was good to be back on the water and even sailing with in sight of where I took my very cold swim, the one that was almost the last thing I ever did, was fine.   I really only gave it a thought for about 2 seconds, maybe 3.
There is a lot of summer ahead.  Todays sail only cost 10 dollars at the launch ramp.  I have to do quite a few of those to equal the cost of a slip for the summer, so that makes spending the 10 bucks a lot easier.  Let's see what the summer has in store for us.
Fair Winds!
Although I am thinking of having a new mainsail built for Ventura and using her as much as I can I will say that if anybody needs a very, very cheap boat and trailer I am open to selling her.  I have too many boats right now and I really miss sailing my Bristol
Posted by Richard at 4:37 PM