Sail number 8 for the season.  That gets us down to under $70/sail.  Still a bit much but today's sail was worth much more. 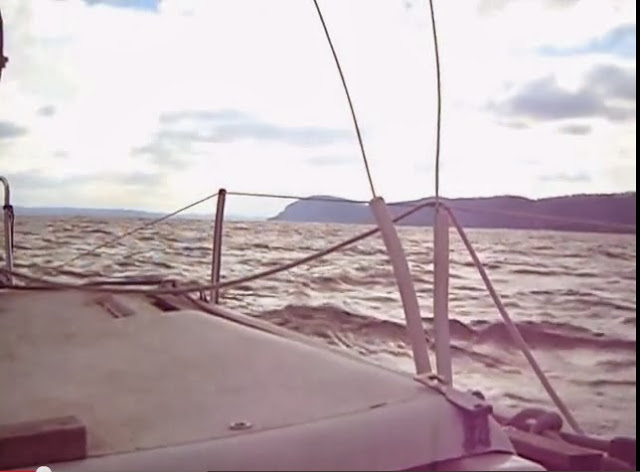 When I set out the temps were in the low 30's f, but got up to the high 30's by the end.  I have great gear so I was warm and dry.  Highly recommend Patagonia's foul weather sailing gear. Even though the company really specializes in climbing and hiking and skiing gear, they do great job with these "foulies".  I have worn them on deliveries in the Atlantic in early December and they kept me comfortable.  The designers at Patagonia know how to cut a jacket so that it keeps the elements out but allows one to move about freely.  I dread the day that they wear out and I have to replace them because I don't think I could afford them any longer.

The wind was force 4 or 5 and against the current for most of the sail.  Made for nice white caps and bumpy water.

I decided to try flying only the jib, as my friend who used to own a Venture said he did most often.  This made the helm much more balanced and sailing down wind was surprisingly easy.

Sailing to windward in the short choppy seas the boat got pushed over in the gusts so that the rail was usually awash and occasionally the leeward seats in the cockpit were filled with water.  The first time it happened it was concerning then I realized that the boat hardened up and didn't want to go any further over than that.  I found that pinching into the wind I could lessen the amount of pounding we did when we bounced off the tops of waves.  From the cockpit I could see hull down in the cabin flexing each time we jumped off a wave top.  This boat is not made like my Bristol!  Still, it did just fine and didn't get pushed of the waves, but rather sailed thru them.

I found that if I sailed thru the first wave we came off it fast but not with a thump.  It was the second wave that we'd drop off of and shake the whole boat and watch the hull flex.  So on the second wave I would head up into the wind just a bit so as to stand the boat up as the wind got on the leeward side of the jib.  This had the affect of bringing the boat down on the centerline, or the V of the hull and that was a much softer entry than landing flat on the port or starboard flat of the boats bottom.  In this way we made a little serpentine coarse that still made our coarse heading, and very quickly.

I know that I enjoy sailing a boat in a way that most recreational sailors don't seem to.  I enjoy the "heavy weather" feeling when the boat is heeled and I have to duck waves that come all the way down the boat from the bow into the cockpit.  I like that water is sloshing around in the cockpit.  I like being able to hear a change in the wind strength in the rigging.  It must be a disease.

I was only able to shoot video during the downwind segment and that doesn't give any sense of what it was like sailing to windward but if you sail, you understand the difference.

Trying to return to the marina I realized that I couldn't sail into the basin because it was dead to windward and I didn't trust short tacking with just the jib up.  I started the outboard and I promptly got the rudder lift line caught in the prop!  The good news is that the prop just cut the line and spat it out.  No harm no foul.  I had been worried that this might happen since the first time I sailed the boat, but figured that it must work ok because it had been that way.  I should always trust my suspicions, they seemed to be mostly justified.

My other suspicions are about the rigging on this boat.  During the summer haul out and maintenance I plan to upgrade the rigging and chainplate attachments.  There are many nico pressed fittings and I just don't trust that they were done well.

It is amazing to me that such a great sailing day can be had when most of the boats have been put away for the season.  I know most people don't want to be out in the cold, and the truth is I don't want 'em out there anyway.  I feel like the river and these bays are all mine to use as I want.  That ain't so bad.
Posted by Richard at 1:33 PM