What do you do on a nice early Spring Sunday morning, launch the boat you been building all winter.

It is light and not bad to carry from the house, 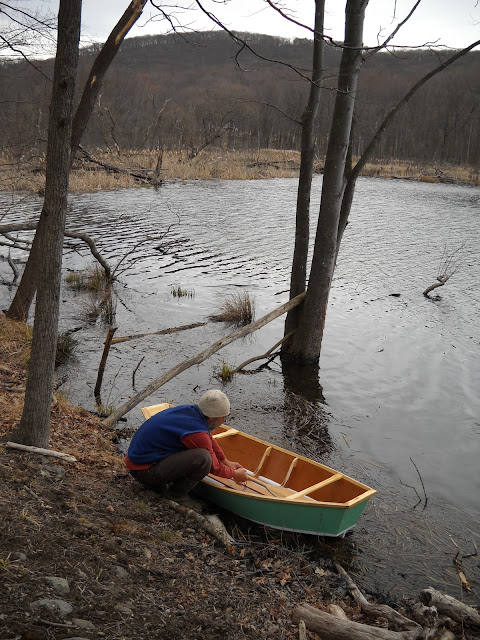 (the oars tie into the floors for easy portaging)


Which is what I had planned to do.

It came out just about right for the pond.
except that a dog doesn't fit.  Maybe that's a plus.  I guess she could fit, but as Liz says the dog running the edge of the pond is probably good for her.

While paddling I went passed the 2 beaver lodges, some canadian geese, some wood ducks, some mallards and a Great blue Heron that flew over my head.  I feel very lucky having this as my front yard.  I am hoping mornings for a paddle or row can be a regular occurrence.  It is makes me very happy to have my design work out.  It is a simple start, but it's a start (maybe an end as well) and it feels good to know I did it.
Now to clean off the muck and make the parts, the kabes or thole pins, for the oars, oh ya, I guess some custom length oars too, and put on some more paint and varnish.
I suppose the boat is more shaped like a canoe than a pram, but I am going to set oars on it for rowing, so I call it a pram.  The compromise of 3 foot beam makes it a bit wide for paddling, but a bit narrow for rowing, either can be done but neither to the best degree.

The length makes the single paddle a lot of work.  I suppose I could have put a keel the full  length and that might have helped a bit, but it is a short boat.

I think the next version of this boat will keep the beam all the way to the stern, 2 feet wide, but it will make the shape a bit of a challenge and might require a sliver more than one sheet of plywood.  Still working on that.

The boat is much more stable and buoyant than I thought it would end up.  Ya!
The ribs though screwed threw the sides of the hull should be shaped better on the next version and maybe attached only at the gunwale.
I'd also like the next version to have an outside chine, it's just easier and no reason not to on this boat.  It would make for a better fit on the joint.
I kept the 2 foot beam over 2 feet, 2 stations, amid ships.  I think in the next version the fair curve would be a better choice.  A version with a sharp bow would be interesting too.  So many options!